I recently posted a video from the BBC about the history of the color blue. It was such a fascinating watch 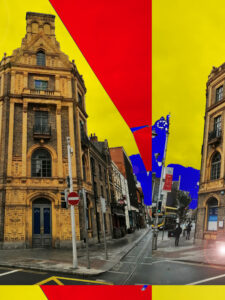 
because blue is the most important color on my palette. This new video from the BBC is about the color gold, and, as expected, it’s influence is pretty far reaching. And who knew that the greatest goldsmith of all was also a murderer, a rapist, and once stole gold from the Pope? Pretty daring stuff I’d say.
I’ve never done a lot with the color gold itself. I tend to rely more on yellow, but there are some images where it seems to come into play for me. These are images where I’m trying to capture a certain darkness to the color yellow, and gold seems to be what comes out of it. It’s not intentional as much as it just fits.
In the image to the left, you can see how the yellow darkens in the sky toward the buildings. While gold is definitely about money historically, and even contemporarily, that’s not what drives me. It’s purely aesthetic and matches well with blues and reds. In fact, it’s not even that easy to buy the color gold in tubes, as it normally comes in some variant of yellow anyway.

You can watch the videos in four parts below or see it in one 59-minute video on this site here: BBC A History of Color: Gold.