Beauty and Evolution: is Beauty a Defense Mechanism? 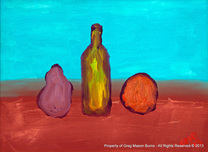 Beauty and Evolution: Definitely some evolved vices in this painting

I can´t argue against this. Denis Dutton has a pretty convincing argument one way or another, but how true is it? His theory suggests that what we perceive as beauty is as evolved as our bodies are. He argues that the shape of a diamond is eerily similar to that of a pre-historic stone spearhead. Furthermore, these stones weren´t just made to kill animals but to show off abilities for the purpose of mating. Think about it, a man makes a stone not to kill, but to show that he´s capable of creating such a stone, and therefore more likely to procreate. Being useful is more important than deadly.

He also suggests that a typical landscape painting is considered beautiful by all cultures regardless of whether that culture has this landscape or not. That´s because a particular landscape that´s considered beautiful across all cultures specifically resembles the Savannah, and has plenty of trees to climb out of danger, grasses for hiding, water for drinking, and animals for eating, etc.

Or how about the fact that cute animals are cute as a defense mechanism? One thing for sure, his theory is controversial, but if he´s right then it turns the whole art world on its head. If beauty is evolved then what´s the point of viewing it in monetary terms? What´s the point of criticizing art in terms of beauty or innovativeness if all it´s for is progressing humankind into the next generation. Are we talking about the right things in today´s world? Should we be talking about art as if it´s meant to move us from one advanced state to a more advanced state? If so, then what happens when we find “the answer” to Life, The Universe and Everything (RIP Mr. Adams)? Does applied art then start to look like a pyramid where only the best art that pushes us in the best / right answer becomes acceptable? Will we get to a point where a singular artist is capable of putting the final piece on top of the pyramid? Is that where we´re heading? If so, the conversation needs to change, and I think that´s something the auction houses may not embrace. After all, if art is a pyramid then so is oligarchy. Every oligarchy loves pyramids and their schemes.

It´s an interesting theory that has given me some ideas for future paintings. First research, but I´m looking forward to getting started. I´m curious to know what you think of this idea of beauty and evolution. Please comment below.