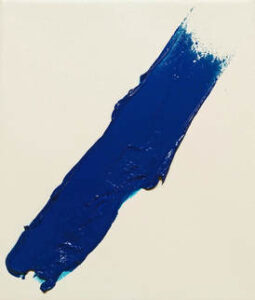 I noted late in 2017 that the Luciano Benetton Imago Mundi project asked me to participate in it’s collection. A collection of artworks from every single nation on earth, each country has it’s own collection. Some countries, such as the UK, have separate pages for the nations that exist within the UK. I am participating in the Scotland Collection. Each artist receives a canvas of the same size, and that’s to make it easier to store and exhibit all the different artworks. The artist uses the canvas in any way he or she prefers, and then sends the canvas back. It becomes a permanent part of the Imago Mundi collection, and is exhibited all over the world.

I painted Incomplete with a single brush stroke of the closest I could come to of the official color of the Saltire (St. Andrew’s Cross) flag, Pantone 300. My photo here is a little darker than it really is, and the photo of the Imago Mundi Scotland Collection link is a little lighter than it really is. I think I got close enough.

This is obviously an abstract work, but it has a pretty significant meaning to me. First off, it is only one part of the Saltire, or in another way, half. From this it gets it’s title of Incomplete. But this incompleteness is more symbolic. Scotland is still a member of the United Kingdom. There is a practical and romantic surge of a belief of the right to self-determination in Scotland. Whether one agrees Scotland should be independent is another question, but this work approaches the subject of independence as if there is still work to be done. So the Saltire, the painting, and the independence movement are only half-way there.
​