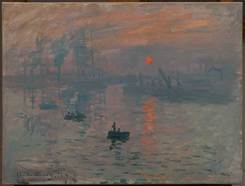 I know, the title is crazy, but someone out there decided to try to find the precise moment impressionism began. Astrophysicist Donald Olson from Texas State University actually took a crack at finding that exact moment using the angle of the sun, the position of the boats, and the wind / weather conditions noted in the painting. The result: Impressionism began on November 13, 1872 at 7:35 AM.This is crazy stuff, but fascinating none the less. First the sleuth poured over hundreds of photos to find the exact location, which was a balcony of a hotel in La Havre. He then looked at the angle of the sun to determine the time of day and the season, but that could have been in the spring or the fall. He needed more information.

A colleague of his noted the tall ship in the background and realized it could only be in that location at high tide. The days were narrowed even more. That smoky scene isn’t just impressionism either. The two scholars saw it was moving westerly and then matched it to weather reports from that day. The wind direction, the angle of the sun, the tides, geometry and trigonometry all led to the conclusion noted above.