Behind the Painting: Igreja do Cerro Branco (and other small towns) 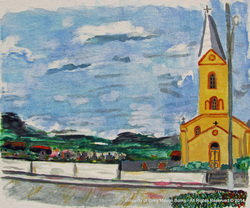 Painting Small Towns: Igreja do Cerro Branco – Watercolor on Board (2014)

I grew up in a small town on the coast of Maine, mostly on an island but sometimes on a peninsula near that island, too. The shop doors would open in May and the tourists started trickling in around Memorial Day at the end of the month. Things would turn into a boom from the 4th of July until Labor Day at the beginning of September. When I was growing up, October was quiet but these days leaf peepers come in hoards, making October the busiest month for many. After that the local folks tire and look forward to a long, quiet winter. We get snow most winters, but because it’s an island the ocean, as cold as the ocean is (50F or 10C  at its warmest in August), keeps things a bit warmer. Some winters we a lot of the heavy stuff. Other winters we get only a little, but every spring the cycle returns and everyone who was so eager to see the tourists leave in October are ready for the fun to begin again in May. This was my rhythm, and it still beats inside of me today. 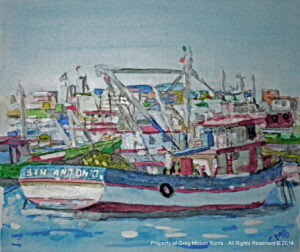 In contrast, while I do have some representative paintings of larger cities, my abstract work focuses more on city life. Cities are unknown to me still, even after living in them for nearly half of my life. I’ve walked many city streets over the past decade-and-a-half and I still feel tension, stress, some unknown tightness in my chest. There’s a lack of calmness in my cityscapes, with big, bright colors and spastic lines dominating them. 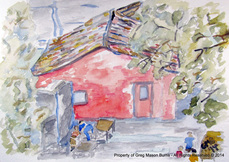 My art is very personal, so these paintings are talking to me. Do my collectors want me to leave the city? That depends on whether or not they prefer tension or serenity. I know I create art from both sides, and I sell both sides, too. Maybe someday when I end up in a small town again my art will shift from the tranquil and attempt draw from the missed hot city street. 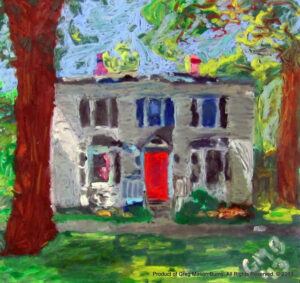 But this hasn’t been my life since I left that small town for another for college in 1993. After I graduated in 1998 I took off for Edinburgh for my masters degree. Then I landed in Boston. Seven years living in what I think is the best city in the United States I left for Santiago de Chile. Then I went to Curitiba, in the south of Brazil. Each metro area is at least a million people in size, with Santiago being the largest at seven million and Edinburgh being the smallest at less than a million. But still, it’s now been about 16 years since I’ve last lived the small town life, which is something I’ve never lost in my heart. 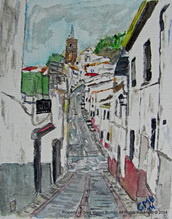 My hope is someday to return to small-town life, but in the meantime my vacations are spent where no one else goes. I visited Spain and stayed a few days in Ardales, a small town not far from Malaga in Andalucia. In Uruguay I stayed in Colonia del Sacramento, a gas-lamp community a few hours south of Montevideo. In Rio Grande do Sul, the southernmost state in Brazil, I ended up in the tiny village of Cerro Branco. Famous for nothing, I left with several bottles of artisan, home-made cachaça.

While living in Chile I visited many small towns. One of my favorites was La Serena, which is about six hours north of Santiago by bus. A few minutes-walk from the sea, it’s population of about 150,000 is so incredibly spread out that it doesn’t feel like more than 10,000 people live there. For me that’s fine. It’s not the size of the city that’s important, but the feel. This holds true for San Antonio, which is just a couple of hours west of Santiago. It’s population is about 90,000, but it feels much smaller because of how it’s spread out. It was not far from San Antonio where I was able to find some inspiration from the famed poet Pablo Neruda at his beach house Ilsa Negra.

PrevPreviousTrust in the Process: The Myth of the Right-Left Brain Mentality
NextHistory of Color: GoldNext