Mimicking is the Sincerest Form of Flattery 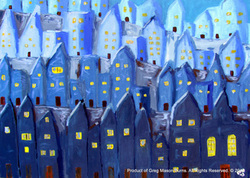 So I was recently mimicked for what I believe is the first time in my artistic career. At the very least I discovered someone mimicking me publicly for the first time, and I think this is a good thing. First of all, he gave me full credit (again, publicly) without me asking, so I’m grateful for that, too. Secondly, I’m honored by this.I first discovered Joseph Hawkin’s piece in a contest on the website Fine Art America. I enter contests there just to gain extra exposure, and I often go on to the contests that I participate in to vote for those paintings I like. I stumbled on his painting, Joe’s Blue City, and was excited to find another artist similar to me. Many artists prefer to be completely different, and I understand that. For me, it’s not important to be different intentionally. I know I’m different, and I know my style is not common. As a result, I often try to find artists whose art I feel are similar to mine so that we can connect, share ideas, and possibly / hopefully gain exposure together as a result of our connections. Who knows, maybe we’ll be the founders of a new school someday. Hawkins does have a similar style to mine, and maybe we’ll collaborate going forward.

Mimicking has a long history in art. The vast majority of old masters intentionally, and quite publicly, copied older masters as a part of their student training. Classes would literally go to a museum and try to paint the painting that was in front of them. Of course, one is not supposed to use these copies as a form of one’s own artwork. In other words, Hawkins cannot enter his piece of art in a juried competition (the competition on FAA was not juried, nor was it any kind of serious or official contest), and if he sells it then he needs to be clear that it’s a mimic of another artwork. But he can show his work as long as he gives credit, which he clearly did on this particular painting.

However, as of Jan 8, 2014, he had done some other paintings in different colors using different materials (but clearly in the same style and same subject) where he did not give credit. My opinion is that he should if the work is very similar, and it is. But this is his decision in the end. I will change this if I receive word from him that he has added credit.

But such is the life of art. I have used other artists to influence my work, and I believe it is impossible to never mimic. By studying one develops one’s own style. It’s impossible for me to completely copy well another person’s art. I just can’t do it, and that’s because my emotions get in the way. This, of course, is a good thing because my art directly reflects my emotional response to my environment. My art is emotional, and that makes it mine. But as a result of studying other artists, I have come to learn that my art uses strong and contrasting colors. It’s simply how I communicate.

On the other hand, don’t do what Damien Hirst did when he sued a kid for making a piece of art similar to Hirst’s For the Love of God, even though Hirst’s piece may very well have been a copy of someone else’s handiwork in of itself.

I am still quite happy with this development. Is this self-aggrandizing? Surely it is, but one can be happy with the subtle points of career growth right? After all, if one can’t celebrate one’s successes, however small, then what is the point of trying to succeed at all? Mimicking really is the sincerest form of flattery.