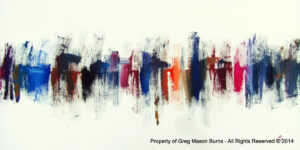 So here we are, the final weekend of my Zaratan residency. When I first arrived I had a lot of plans, some expectations, and at the same no idea what I was going to produce. I had spoken with the gallery before arriving about possibly exhibiting the last week of the residency, but due to their schedule and, quite frankly, my lack of time to create and frame everything properly, they said no. This motivated me to only focus on making art.

Actually, I had another motivation: fear. We put all my art – my entire studio, essentially, with the exception of a few small paintings I brought to the US in my suitcase – into a shipping container in July in Brazil. The shipping company said it would arrive in October. It’s now the end of January and we haven’t heard from them. I have an exhibit in April, and not enough work to show. This residency needed to produce something. I was trying to not think about that despite the fact that I was thinking about it a lot. Losing one’s entire collection of art is disappointing. Knowing I may need to replace it is stressful beyond the losing the work in of itself. 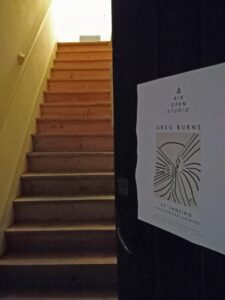 Just go on up the stairs to the open studio

But last week Zaratan looked at my work and thought I had enough to do an open studio exhibit. No framing, but I did buy some black matting paper to make things look more professional. I’m showing 12 drawings and paintings ranging from watercolor to charcoal to dry pastel, as well the beer-can sculpture and the video collaboration I did with Daniel Gawronski.I’m also doing a risograph for the opener, which at its most basic is just an ink-based, high-speed copy machine. What makes these great is that one runs ink copies through the machine multiple times. Whereas normal copiers use heat to imprint the image and therefore can’t run copies multiple times. ​Zaratan has started playing with this technology, and I’m the first resident asked to create a risograph work on behalf of the gallery. I’ll keep a few copies myself and the gallery will keep some, too. The creativity is mine and the cost is theirs. 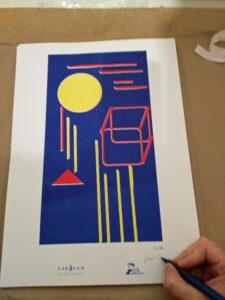 Signing a copy of the risograph, titled “Sunset”. One of 30 copies.

Reflecting back on this month, it was nothing short of crucial. Not only was I able to create enough works to have a mini-exhibit, but I feel good about producing enough for that exhibit in April as well. I collaborated with another artist by putting video to his sound, and this is something I never expected. I also got to learn new skills in sculpture and the risograph. At the same time, I also expanded my fan base. I got to meet some cool people, and I learned that Lisbon is a city where emerging artists are developing great contemporary art. It’s still cheap enough for artists to grow here without breaking the bank.The open studio was a success, too. I had quite a few visitors and a lot of discussions about the theory. Most people really liked the bold, charcoal drawings, and everyone agreed with the project’s intent: to dissect the media and show how it really affects our identity and decision-making, whether we believe it or not.

I couldn’t have done this without your help, so thank you. But now it’s about enjoying the last weekend, seeing if people show up to the open studio, getting feedback if possible, and having a few beers with the cool artists who put this collective together. After that, it’s only the future.